Protesting the transition, Lee filed for an injunction with the Seoul Southern District Court, citing what he called a "procedural error" with the leadership switch, and a separate lawsuit seeking to nullify the validity of the party's emergency committee.

On Friday, the court ruled in favor of Lee in the injunction suit and ordered that Joo's duties be suspended until there comes a decision in the main lawsuit. Unless Joo is suspended, the court said, Lee could suffer irrevocable damage because Joo can call a national convention to elect a new leader.

Under the party charter, the PPP can switch to the emergency committee leadership when the party's Supreme Council is disabled or in other emergency situations. But the court ruled Friday that the PPP's situation was not considered an emergency warranting such a transition.

The PPP protested the court's decision and filed an appeal.

"The Seoul Southern District Court's decision to accept the injunction request is an excessive violation of a political party's autonomous and internal decision-making," PPP spokesperson Park Hyeung-soo said in a statement.

Rep. Yoo Sang-hum, the PPP's legal affairs chief, said Friday's decision suspended Joo's duties only and that the appointments of other emergency committee members are valid until the court delivers a ruling in the main lawsuit.

The PPP sought to switch to the emergency leadership system last month after floor leader Rep. Kweon Seong-dong inadvertently exposed text messages he exchanged with President Yoon Su-yeol, in which Yoon was seen backbiting about Lee.

Yoon said at the time he was satisfied with the way the party was run after Kweon took over as acting chairman following the six-month suspension of Lee's party membership over allegations of sexual bribery and an attempted cover-up.

Yoon criticized Lee for engaging more in internal fighting rather than attacking the opposition.

That, coupled with unpopular personnel appointments and policy proposals, such as lowering the elementary school starting age, has led Yoon's approval ratings to fall to record lows just three months after taking office.

Mainstream PPP members, who are close to Yoon, sought to switch the party's leadership after determining the situation as an emergency. But Lee vehemently protested the decision, saying the move is aimed at removing him from office before his term ends next year. 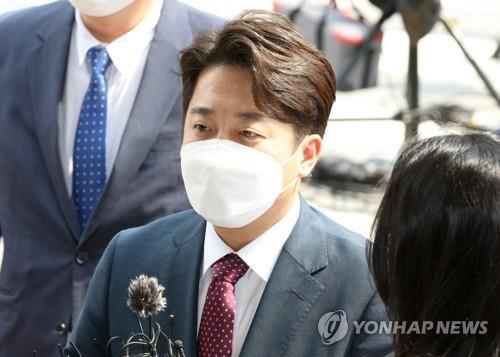