SEOUL, Sept. 13 (Yonhap) -- President Yoon Suk-yeol traveled south Tuesday to meet with and pledge support for young people who have left the care of the social welfare system.

Yoon traveled to Asan, 86 kilometers south of Seoul, where he visited a welfare center dedicated to helping children and young people settle into society within five years after their period of foster care ends.

The visit was a demonstration of Yoon's commitment to expanding welfare services for vulnerable groups amid a spate of suicides among struggling citizens, including two young people who had left their orphanages in recent years. 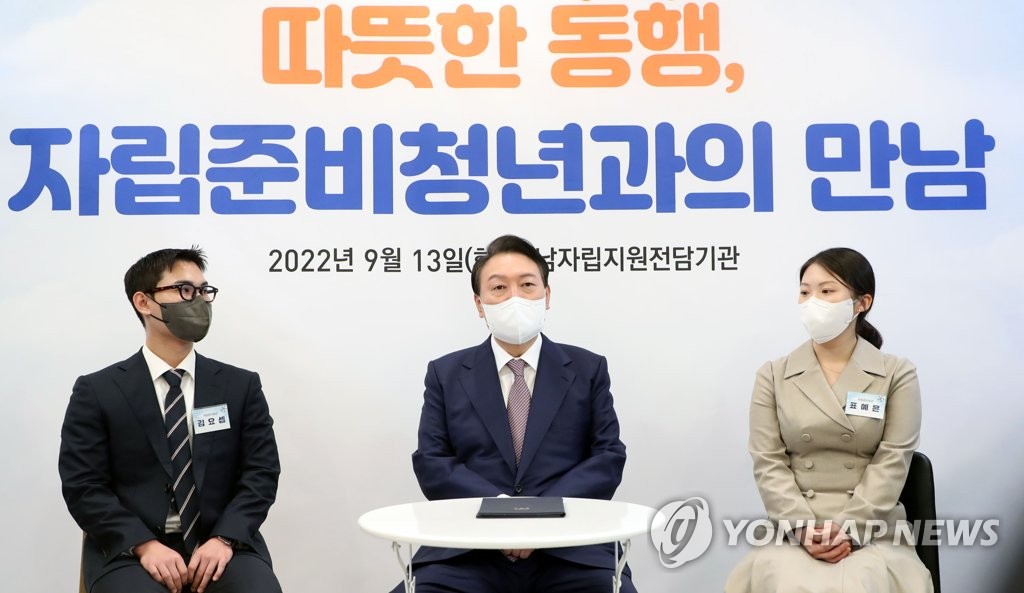 Yoon said he was not well aware of the problems faced by young people preparing to support themselves until he had a chance to speak with some of them around Christmas last year.

"I understood that the state is unable to properly listen to their voices and that these citizens are really abandoned," he said as he met with four young people under the center's care and relevant officials.

Yoon recalled that one person told him children in foster care and under the care of other social welfare services are made to leave when they turn 18 with no preparation other than 5 million won (US$3,630) in cash.

"I thought to myself that when I take office, if I am elected, that even though I may not be able to change everything at once, I would take an interest and take proper care of these young people because they are our nation's precious assets," he said.

Yoon also addressed representatives of organizations supporting the center, including Samsung Electronics, Chungwoon University and an association of faith groups, saying he is grateful to the private sector for their contributions.

"Even if the government runs a tight fiscal policy due to difficult economic conditions, I will tell you that we will try hard to spend money on these areas where it is needed to help our young people prepare for the future," he said.