SEOUL, Sept. 14 (Yonhap) -- President Yoon Suk-yeol met Wednesday with young people training to compete in a world skills competition and pledged to support the advancement of people with technical skills.

Yoon visited the Global Institute for Transferring Skills in Incheon, west of Seoul, to meet with participants in the WorldSkills Competition 2022 Special Edition, which kicked off last week in 15 countries and regions.

South Korea will host events for eight out of a total 61 skills, including cloud computing and 3D digital game art, in Goyang, northwest of Seoul, next month.

Yoon toured the institute and watched competitors train in furniture making, mobile app development and photoelectronic technology, before holding a group meeting with 48 members of the South Korean team. 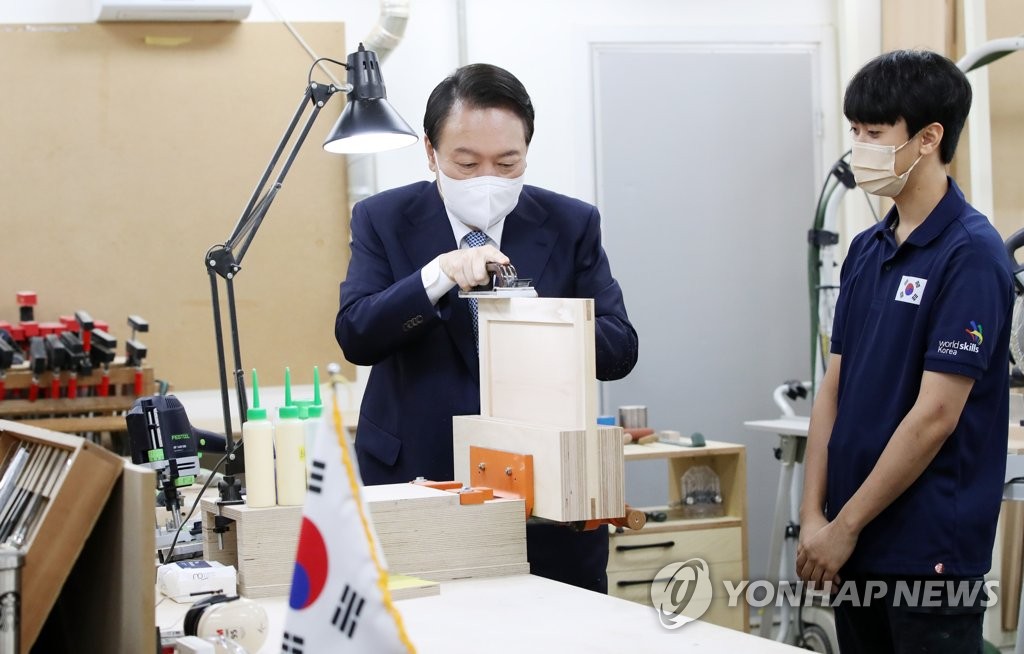 "The skilled professional and technical work force of our industrial sites was the driving force of our economy's rapid growth," he said during the meeting, noting South Korea has won the biennial competition 19 times.

Yoon compared the skilled work force to the military, saying no number of advanced weapons, such as F-35 or F-22 fighter jets, could be deployed for national defense without the trained and professional service members that can use them.

"You are the connecting link between applied science and technology, and consumers," he said.

The meeting was also attended by representatives of companies that have actively hired skilled young people and sponsored their participation in the competition, including Samsung Electronics and Emons Furniture.

Yoon said technology holds the key to the nation's development and future, and promised to do his best to build a country "overflowing" with technically skilled people, his office said.

He also emphasized the importance of creating a society where such people are given special treatment, it said.