Defense Minister Lee Jong-sup unveiled the scheme in an exclusive interview with Yonhap News Agency following the North's recent codification of an assertive nuclear policy that leaves the door open for launching a preemptive strike in case of a regime security threat.

"In the tailored deterrence strategy set to be revised, the South and the U.S. will make the sharing of intelligence and contingency consultation procedures more systematic, and further flesh out responses to each nuclear crisis situation," Lee told Yonhap at his office in Seoul on Wednesday. 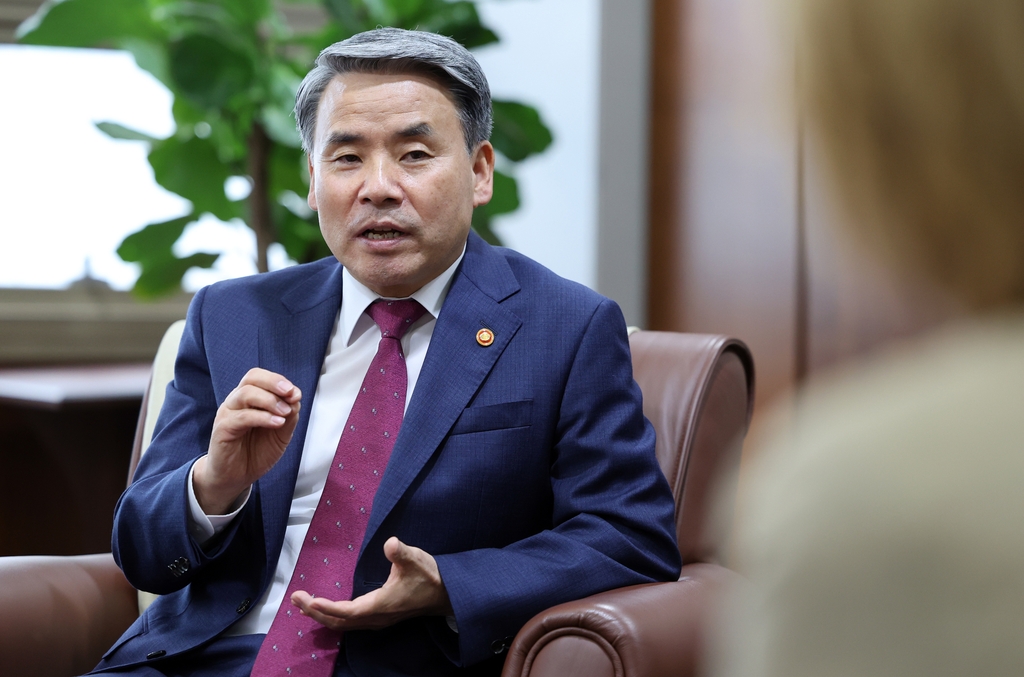 Among the crisis scenarios is the North's verbal threat of a nuclear attack, the minister said. He did not elaborate on other scenarios, but they could include a phase when signs emerge of an impending nuclear strike or the North's actual recourse to nuclear options.

Adopted in 2013, the allies' tailored deterrence strategy (TDS) is designed to cope with growing threats from the North's nuclear and other weapons of mass destruction. It is the first such bilateral deterrence document that Washington has crafted with a single treaty ally.

The need for the revision has arisen, as Pyongyang has been doubling down on its nuclear program despite years of peace efforts under the former liberal Moon Jae-in administration. The regime is thought to have completed key preparations for what would be its seventh nuclear test.

"At present, the North's nuclear threats are far more advanced compared with what they were in 2013, while the capabilities of our military and the U.S. military have also developed considerably," Lee said. "In a comprehensive consideration of such changes, we are working on revising the TDS."

The revision work took on greater importance last week, as the North promulgated a law on its nuclear policy outlining five conditions for its nuclear use, which indicated its intention for first-strike nuclear options.

In a reassuring tone, the defense minister reiterated his ministry's stern message against the North's potential use of nuclear arms.

"Should the North attempt to use nuclear arms, it would face the overwhelming response from the South Korea-U.S. alliance and its regime would be put on a path of self-destruction," Lee emphasized.

His message is likely to be backed up by the session of the allies' vice-ministerial Extended Deterrence Strategy and Consultation Group (EDSCG) slated to take place Friday in Washington, D.C., for the first time since 2018. Extended deterrence means the U.S.' stated commitment to mobilizing a full range of its military capabilities, including nuclear ones, to defend its ally.

Designed to reinforce the credibility of extended deterrence, the EDSCG will touch on a raft of issues, such as the sharing of intelligence, crisis-period communication, allied defense exercises and the deployment of U.S. strategic military assets, according to Lee.

"The credibility of extended deterrence refers to the U.S. delivering on its commitment to the defense of the Korean Peninsula despite risks of an attack on the U.S. mainland," the minister pointed out.

Touching on the possibility of the North pressing ahead with a nuclear test, Lee warned the test would be met with a "stronger-than-usual" response from the South Korea-U.S. alliance.

Despite his emphasis on deterrence, Lee also held out the prospect of the Yoon Suk-yeol administration taking reciprocal measures to reduce tensions and build trust with the North, which he said would be discussed should the North take substantive steps towards denuclearization. But he did not specify them.

"We will take such measures in a bolder manner," Lee said.

Commenting on the U.S. Forces Korea's efforts to upgrade its THAAD missile defense battery in the southern county of Seongju, Lee called them "not unusual."

The U.S. military has been working on the upgrade designed to streamline and integrate its THAAD and Patriot missile defense systems into a single program for enhanced, more flexible security operations.

"All weapons systems are bound to be upgraded continuously. It's not unusual," he said in broad generalities.