"We intended to express the essence of BLACKPINK in this album, as indicated by its title 'Born Pink'," member Rose said in a written question-and-answer released by the band's agency YG Entertainment on Thursday. "I'm confident that we produced music that we haven't experienced before, using our creative imagination."

The album set to hit music services at 1 p.m. Friday has a total of eight songs, including the lead single "Shut Down" and the pre-released track "Pink Venom." Six others are "Typa Girl," "Yeah Yeah Yeah," "Hard to Love," 'The Happiest Girl," "Tally" and "Ready For Love." 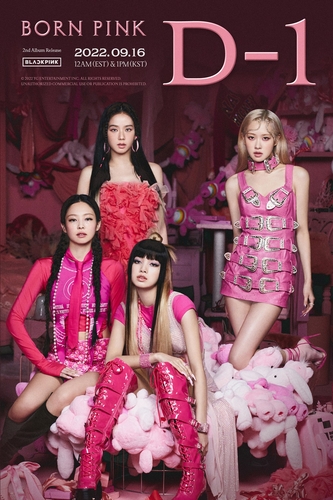 "Shut Down" contains a sample of "La Campanella," composed by Niccolo Paganini (1782-1840), a legendary Italian violinist and composer in the 19th century, combined with a trendy hip-hop beat, according to the agency.

"I hope the emotions and thrills we felt when we first heard this song can also be delivered to all people who listen to it," Jennie said.

Lisa said all members knew it would be the lead single when they first heard it.

"We just looked at each other, unable to say a word, when we first listened to the song's introduction. With our eyes, we were saying 'This is the main song.'"

After the release, BLACKPINK will begin a world tour, starting with two concerts in Seoul on Oct. 15-16.

YG announced the band will hold three more concerts -- in Dallas on Oct. 29 and Houston on Oct. 30 and Atlanta on Nov. 3 -- upon requests from fans.