INCHEON, Sept. 15 (Yonhap) -- "Squid Game" creator Hwang Dong-hyuk received a warm welcome upon his return to South Korea on Thursday after winning the country's first prize at the Emmy Awards.

He arrived at Incheon International Airport in Incheon, 40 kilometers west of Seoul, along with "Squid Game" actors Jung Ho-yeon and Park Hae-soo, with about 100 fans and journalists gathered to celebrate the historic honor.

"Thank you everyone for supporting us," he told reporters upon arrival. "The Emmy Awards was the final race for the first season. It's fortunate that we wrapped up the season with meaningful prizes." 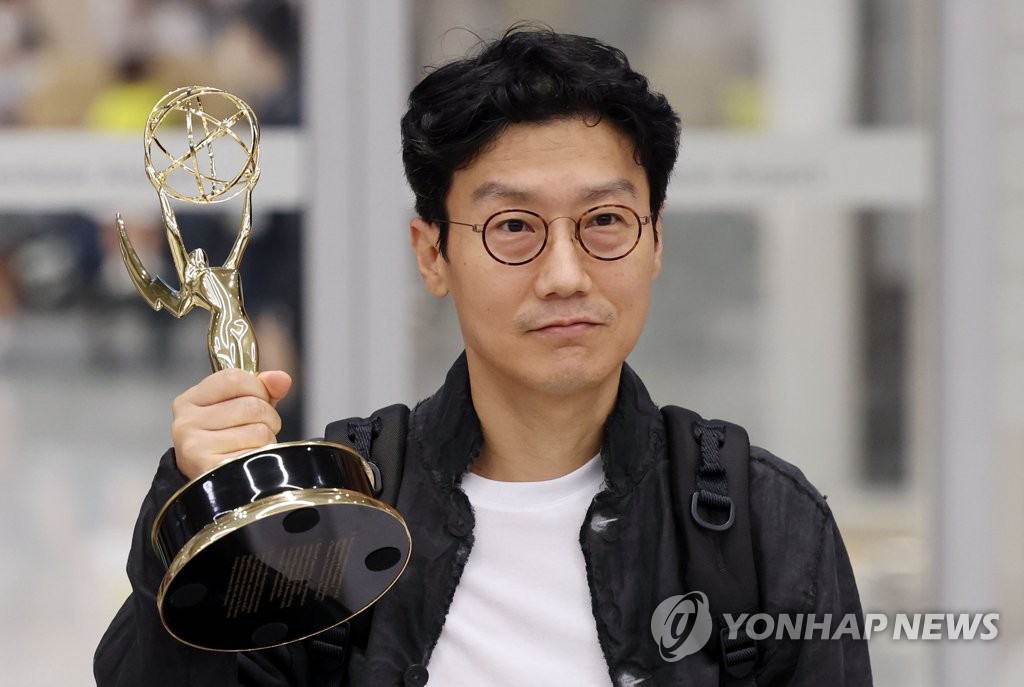 "Squid Game," written and directed by Hwang, made history at the 74th edition of the Primetime Emmy Awards held Monday. The Emmys recognize outstanding TV programming for the year in the United States.

The nine-part Netflix original about a deadly contest bagged a total of six Emmy titles, including best director for Hwang and best drama series actor for Lee Jung-jae, becoming the first non-English TV show ever to win America's most prestigious TV awards.

Its multiple wins at this year's Emmy were widely predicted as the show had already scored victories at major U.S. award shows, including the Golden Globes, Critics Choice and the Screen Actors Guild (SAG) Awards, since its official release about a year ago.

The director said "Squid Game" will return with the second season and hopes to repeat the feat.

"I wish season 2 will be beloved by fans like season 1," said Hwang. "If I'm given another chance, I hope to go for Emmys, Golden Globes and SAG Awards again."

Hwang and other Emmy-winning crew members will have a press conference on Friday.