SEOUL, Sept. 18 (Yonhap) -- President Yoon Suk-yeol on Sunday instructed officials to maintain thorough readiness for Typhoon Nanmadol as the country's southern island of Jeju and the southeast coast are predicted to come under the typhoon's influence.

Yoon made the instruction to Interior Minister Lee Sang-min at Seoul Air Base earlier in the morning before leaving for London for a three-nation trip that will also take him to the United States and Canada, a presidential spokesperson said in a written briefing.

"It is worrisome that the stronger-than-expected typhoon could inflict additional harm on our country, including Pohang and Gyeongju that were damaged by Typhoon Hinnamnor," Yoon was quoted as saying.

Yoon urged the interior ministry and other disaster management authorities to "respond seriously to Nanmadol to an extent that could be seen as excessive," highlighting "special caution for any potential human damage." 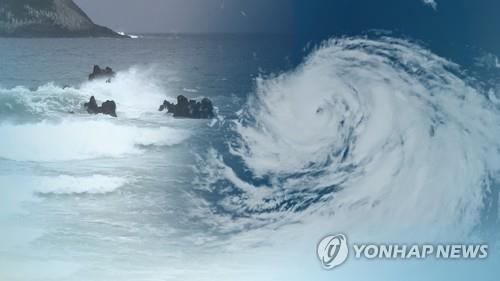 Hinnamnor, this year's 11th typhoon, made landfall in South Korea's Geoje on Sept. 6, leaving 12 people dead and causing thousands others to evacuate.

Starting Sunday night, South Korea's southern island of Jeju and the southeast Gyeongsang coast are expected to come under the influence of Typhoon Nanmadol, this year's 14th.

With a central atmospheric pressure of 935 hectopascals and a maximum wind speed of 53 meters per second, Nanmadol was moving northwest over waters 210 kilometers south-southeast of Japan's Kagoshima as of 9 a.m., according to the Korea Meteorological Administration.

South Korea may come under the influence of Nanmadol from Sunday night through Monday afternoon while the typhoon passes over waters 130 km north-northwest of Kagoshima between midnight and 3 a.m. Monday, the weather agency said.

Areas near the Gyeongsang coast may see heavy rains of up to 150 mm and strong winds through Monday as the region comes under the influence of Nanmadol.

Yoon is set to arrive in London on Sunday afternoon (local time) to attend the state funeral of Queen Elizabeth II. He will then fly to New York to give his first address to the U.N. General Assembly and hold a summit with U.S. President Joe Biden. Yoon's second overseas trip since taking office in May will also take him to Canada on the last leg. 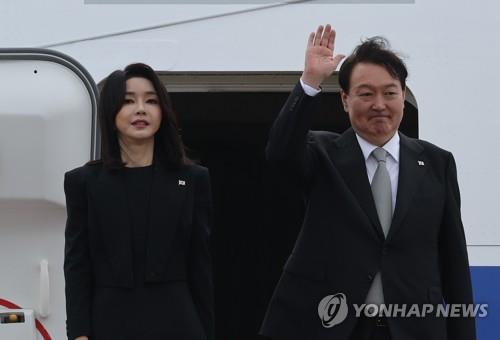