(ATTN: UPDATES throughout with more remarks, details)
By Song Sang-ho

SEOUL, Sept. 20 (Yonhap) -- The United States made yet another dialogue offer to North Korea this summer through a communication channel in New York, but the North has not responded, Washington's top nuclear envoy said Tuesday.

U.S. Special Representative for North Korea Sung Kim said that the overture was made through the so-called New York channel, involving the North's diplomatic mission at the U.N., in July, as he highlighted the Joe Biden administration's continued commitment to reengage with Pyongyang.

"I believe our last communication with the DPRK was during the summer. We sent the message reiterating our interest in re-engagement and also re-offering our assistance in COVID-related items," Kim said in a meeting with reporters in Seoul, referring to the North's official name, the Democratic People's Republic of Korea. "But I say 'no interest' (from the North) in the sense that they have not responded to any of our messages." 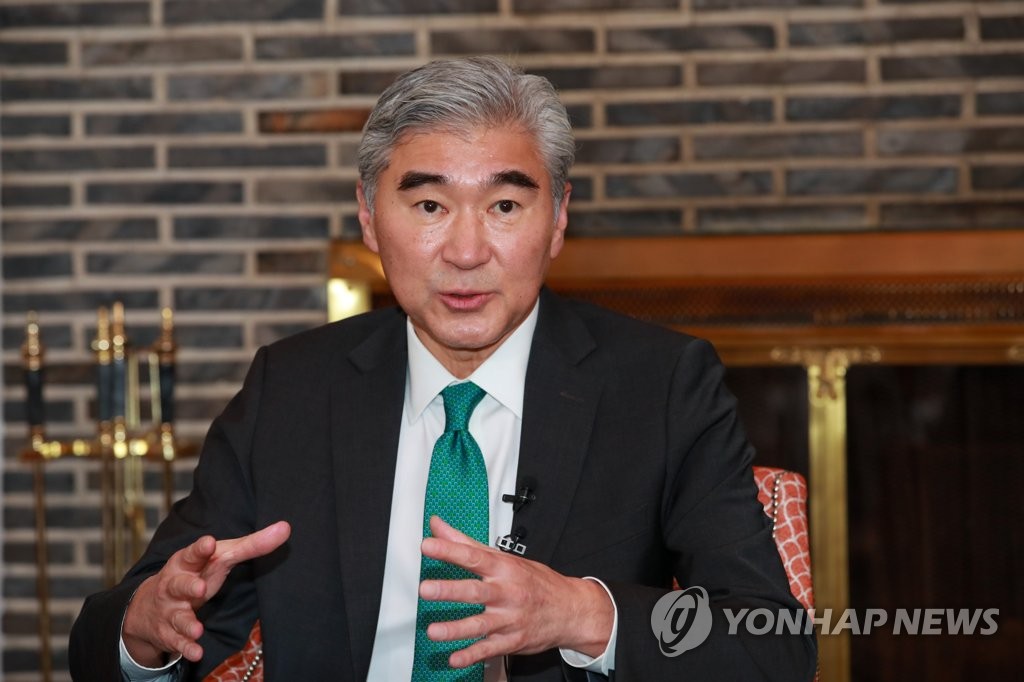 The ambassador pointed to a "strict" pandemic-induced lockdown in the North as well as the spread of the coronavirus as potential reasons why the North has remained unresponsive to the latest and previous overtures by the U.S. in recent years.

"As they get the COVID situation under control, and as they open up, hopefully, they might show some interest," he said.

Kim stressed that both Seoul and Washington have "many creative ideas" for reengagement with the North, calling on Pyongyang to return to the negotiating table to work towards the "complete denuclearization" of the Korean Peninsula and address "issues of concern to all sides." But he did not elaborate.

"The problem is that in order for us to try these ideas, we need a partner. But the one thing we want to avoid is just negotiating by ourselves," he said. "We need a willing partner on the other side of the table, who will engage us in a serious discussion about all of these ideas that we have ... many creative ideas, including ideas to address their concerns."

Asked if his team will reach out to the North in the near future again, the envoy said it has no plans at the moment.

In a show of Washington's desire for diplomacy with Pyongyang, Kim noted Biden has not foreclosed the possibility of "leadership engagement" with the recalcitrant regime.

"We have not ruled out leadership engagement in diplomacy, but it would have to be done in a way that there's adequate preparation, and that prospects for progress are real in order for our president to engage personally," he said.

Touching on lingering concerns about the possibility of the North carrying out what would be its seventh nuclear test, Kim warned that there will be a "stronger-than-before" response should it happen.

"I think our response will be responsible and decisive, and it will send a very clear message to the DPRK that there are consequences to their irresponsible actions," Kim said.

He added, "I think it's inevitable that our response will be stronger than before. We need to build on what we have been doing because it wouldn't make sense for us to be remaining the same when North Koreans are continuing to escalate in terms of their provocation."

Asked to comment on the North's recent codification of an assertive nuclear policy, Kim took it seriously, but cautioned against "overanalyzing" it.

"I think the security risk is too real for us to just assume that anything's a bluff," he said. "I think rather than trying to overanalyze what it really means in reality, it is much more constructive for us to focus on what we can do, which is to make sure that we are prepared to deal with all contingencies."

"I can assure you that this is still an issue of great priority and concern to the U.S. government," he said, cataloguing a series of concerns about the North's weapons of mass destruction programs and human rights and humanitarian situations.

"So, they would have to be phased," he said. "I think it's reasonable to expect you sort of start with the (nuclear) freeze and you continue to build towards complete denuclearization."

On the possibility of arms reduction being an interim goal toward the end state of the North's denuclearization, he said that "no one" is talking about arms reduction.

"Our policy remains to pursue complete denuclearization through diplomacy," he added.