The two met on the margins of the U.N. General Assembly and talked for 25 minutes about North Korea, cooperation between South Korea and the U.N., and issues raised during Yoon's address to the assembly earlier in the day, according to Kim Eun-hye, senior presidential secretary for press affairs. 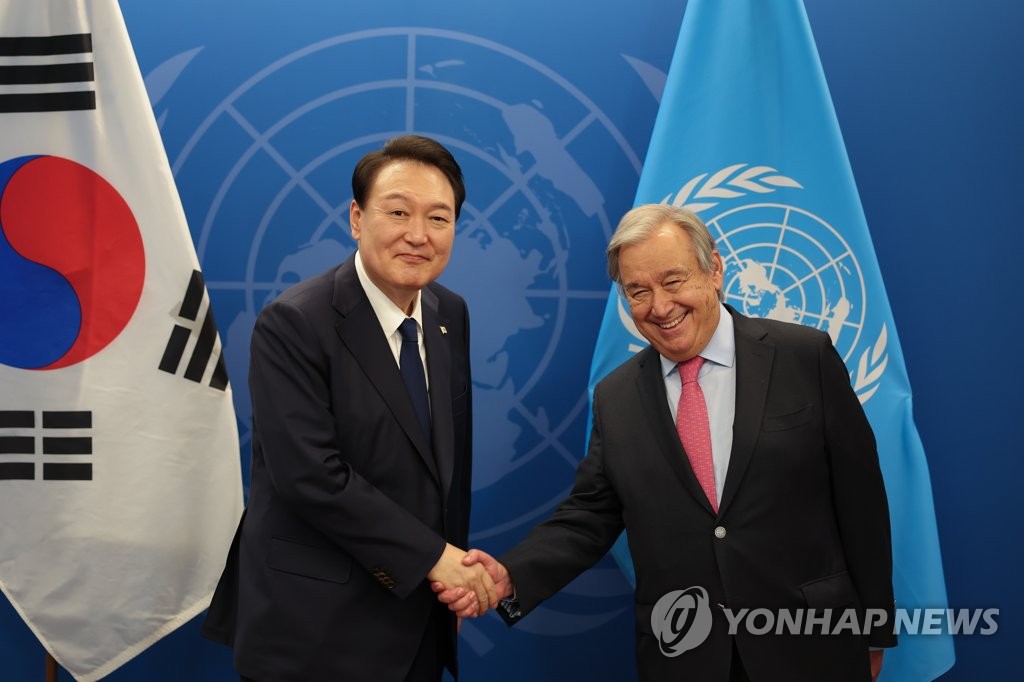 Yoon thanked Guterres for supporting the "complete, verifiable and irreversible" denuclearization of North Korea and efforts to establish sustainable peace on the Korean Peninsula, Kim told reporters in New York.

Yoon also said he believes not only South Korea but also international financial groups and countries in Northeast Asia will spare no amount of investment and financial assistance for North Korea if it "chooses the better path to openness," she said.

"President Yoon said he will make every effort to get North Korea to open its closed doors, and contribute to peace in Northeast Asia and the world," Kim said.

"If despite such efforts, North Korea resumes nuclear testing or goes ahead with another nuclear provocation, he asked that the secretary-general take a continued interest and offer support so that the international community can respond sternly with one voice," she added.

Guterres assured Yoon that the president and South Korea can trust the U.N., and that the U.N. Security Council will respond clearly to provocations threatening freedom and peace.

He also expressed full support for the ideas laid out in Yoon's speech to the U.N., including the need to increase support for developing countries and share digital technologies.

Guterres said Yoon's address "accurately reflects our thoughts and strategic values," and that learning the president's administrative philosophy led him to believe Yoon was "fit to be the U.N. secretary-general even now," according to Kim.

The two agreed international financial groups and international organizations would be ready to provide the full range of assistance to North Korea should it take steps to denuclearize and open its doors, Kim said.