Kim Gunn, its special representative for Korean Peninsula peace and security affairs, held talks here with his American counterpart, Sung Kim, to assess the recent security situation weeks after the North passed a law that authorizes the preemptive use of nuclear weapons in the face of an imminent threat to regime security.

They shared the view that the new law poses "a serious threat," as it outlined broad conditions for the Kim Jong-un regime to launch a preemptive nuclear strike, according to the ministry. 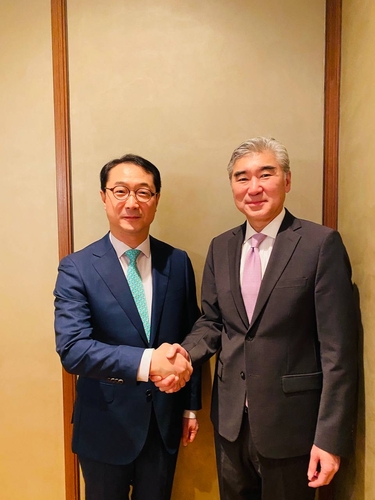 The envoys noted that through a recent bilateral high-level extended deterrence meeting, the allies made it clear any North Korean nuclear attack would be met with "an overwhelming and decisive response" and reiterated the U.S.' "ironclad and unwavering" security commitment."

They also assessed Pyongyang is ready to conduct its seventh nuclear test "at any time" and vowed to maintain the strong combined defense posture to deter the North's additional provocations.

Later in the day, Kim Gunn also met with Elizabeth Rosenberg, the assistant secretary for terrorist financing and financial crimes at the U.S. Treasury Department, to discuss sanctions on North Korea, the ministry said in a separate release.

They agreed to work in coordination to block Pyongyang's attempt to secure illegal funds for its weapon programs through overseas North Korean IT workers or cryptocurrency theft, it added.