BUSAN, Sept. 23 (Yonhap) -- An imposing U.S. aircraft carrier arrived in South Korea on Friday for its first combined drills with the South Korean Navy near the peninsula in five years, as the allies are striving to reinforce deterrence against evolving North Korean military threats.

The nuclear-powered USS Ronald Reagan docked at ROK Fleet Command in Busan, 390 kilometers south of Seoul, amid worries about the possibility of the North staging a nuclear test or other provocations. ROK stands for South Korea's official name, Republic of Korea.

The arrival of the carrier, a centerpiece of America's naval might, came after Presidents Yoon Suk-yeol and Joe Biden reaffirmed their commitment to deploy U.S. strategic assets in a "timely and coordinated manner as necessary" during their summit in Seoul in May.

Upon arrival, Rear Adm. Michael Donnelly, commander of the carrier strike group, highlighted America's security commitment to South Korea and the "watertight" relationship between the allies.

"The port visit of USS Ronald Reagan to Busan and the Republic of Korea is a clear and visible presence and commitment of the United States ... and clear commitment to the alliance," he said.

He also portrayed the allies as having a "history of shared blood and common values," and a "clear vision for a free-and-open Indo-Pacific." 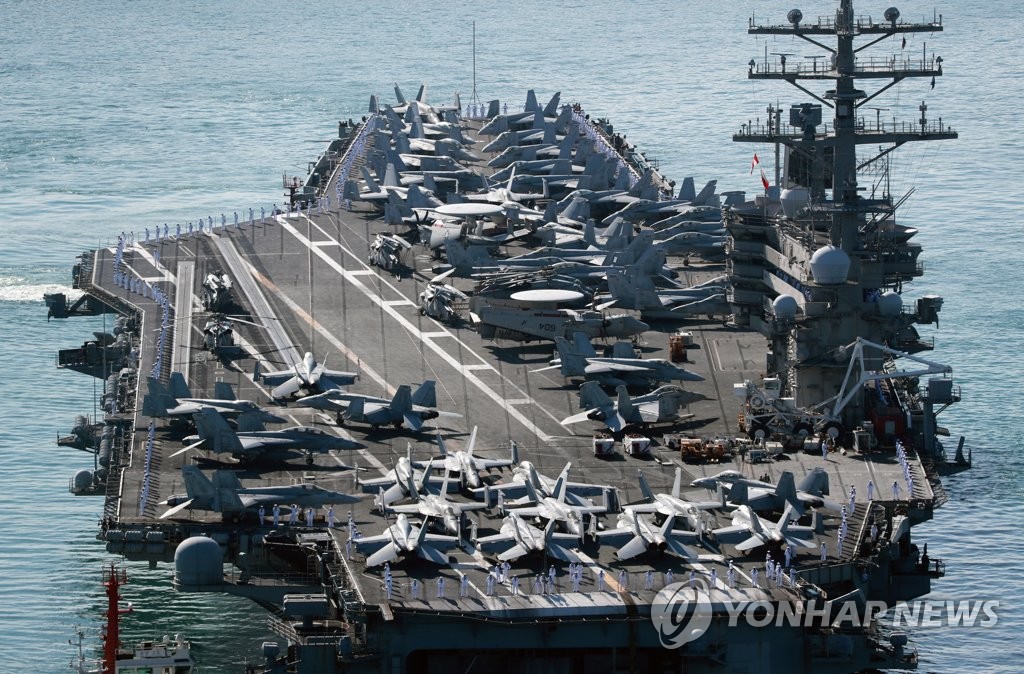 Asked if the presence of the carrier is intended to send any message to Pyongyang, Donnelly said, "We leave the messaging to diplomats."

"This visit is just part of ongoing and numerous combined operations that we conduct throughout the region and around the peninsula with the ROK Navy," he said.

"Our interactions with the ROK Navy are tactically first purposeful in developing interoperability to ensure credible combat power and (it's an) opportunity for us to demonstrate that we stand together," he added.

On the question of whether the Joe Biden administration's policy on Taiwan is considered in the allies' operations, the commander declined to comment.

"What I can tell you is that the ROK Navy and U.S. Navy seek every opportunity to practice interoperability, and to exercise our common tactics and operations where we operate anywhere throughout the Pacific," he said.

He added, "As common Pacific nations with a long history, both in the alliance as well as operating together, we share common security interests, and we love to stand by each other wherever and whenever required."

Commissioned in July 2003, the 97,000-ton, 333-meter-long Ronald Reagan is America's only forward-deployed aircraft carrier. Since 2015, the supercarrier has been based in the Japanese city of Yokosuka, which is home to the U.S. 7th Fleet.

Ronald Reagan can carry over 5,000 sailors as well as around 90 on-board aircraft, including F/A-18E Super Hornets, and E-2D Hawkeye early warning and control aircraft.

The strike group sails with 33 partners and allies for bilateral or multilateral maritime exercises and operations, according to the U.S. Navy. In 2021, the carrier was deployed to support the withdrawal of U.S. troops and others from Afghanistan.