SEOUL, Sept. 23 (Yonhap) -- The 2021 U.S. Open women's singles champion Emma Raducanu sailed into the semifinals of the lone annual WTA stop in South Korea on Friday, enjoying her easiest victory so far for her first final-four appearance since her Grand Slam breakthrough.

Raducanu defeated Magda Linette of Poland 6-2, 6-2 in the quarterfinals of the Hana Bank Korea Open at Olympic Park Tennis Center in Seoul. In Saturday's semifinals, Raducanu, world No. 77 seeded sixth here, will meet the winner of Friday's last quarterfinal match, between the top-seed, Jelena Ostapenko of Latvia, and Victoria Jimenez Kasintseva of Andorra.

The other semifinal match will pit No. 2 seed Ekaterina Alexandrova of Russia against No. 7 seed Tatjana Maria of Germany. 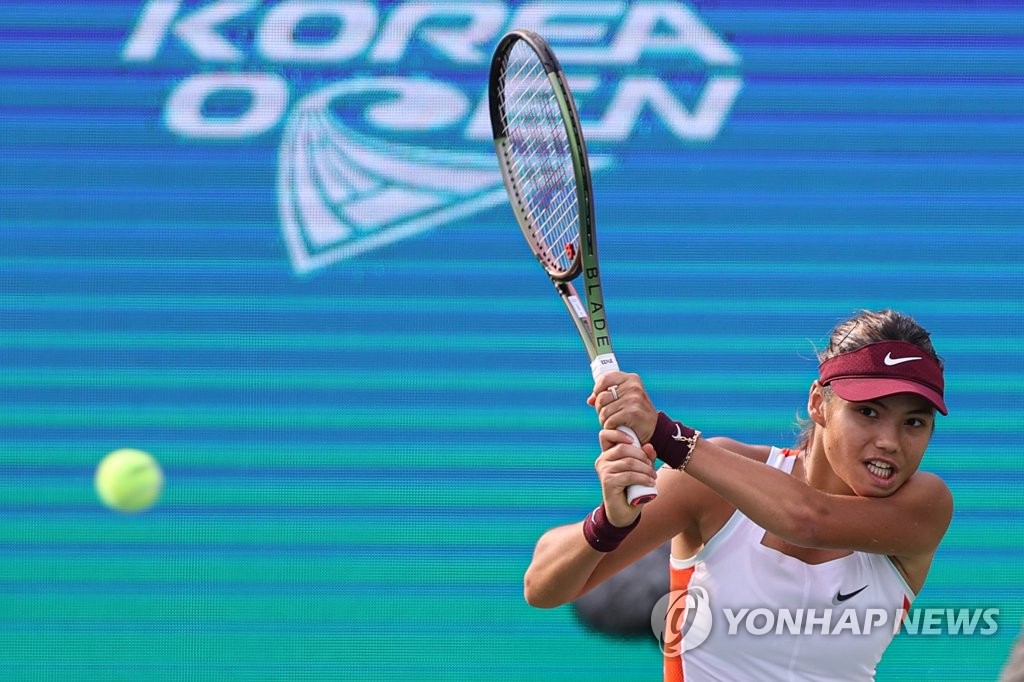 Raducanu, from Britain, has not won a title since her Cinderella run to the U.S. Open title last year. This was also just her third quarterfinal appearance since then.

Raducanu broke Linette to start the match, and rode her superior groundstrokes to take the next game for a 2-0 lead.

Raducanu broke Linette for the second time for a 3-0 lead and held her serve to open up a 4-0 lead after just 15 minutes.

Linette got on the board in the next game, as her serves finally showed some zip, but Raducanu returned the favor to go up 5-1.

Linette held her serve again to extend the set, but Raducanu closed out the opening set by once again overwhelming Linette with her groundstrokes.

The players traded a game each to begin the second set. After Raducanu broke Linette to go up 2-1, Linette took a medical timeout to treat an apparent leg injury.

And Linette never got her groove back, as Raducanu grabbed the next three games in a row for a commanding 5-1 lead. Linette battled back to get a game back but in the very next game, Raducanu quickly put her finishing touch on what seemed to be an inevitable victory.