Lee, who accompanied President Yoon Suk-yeol on his visit to Ottawa, met with Canadian Science and Industry Minister François-Philippe Champagne in Ottawa on Friday (Canada time) to discuss measures to broaden cooperation in the supply of key minerals and other high-tech technologies involving semiconductors, power plants and renewable energy.

The two ministers stood on common ground that stronger economic cooperation in such sectors would be able to generate a large synergy effect, particularly amid the supply bottleneck and the intensifying tech competition on a global level.

The meeting came in the wake of the United States' enforcement of the Inflation Reduction Act (IRA) on Aug. 16, which is feared to put Korean carmakers at a disadvantage in the American market.

The IRA is expected to raise South Korean car exporters' demand for Canadian minerals that comprise key materials for batteries and parts for electric vehicles. 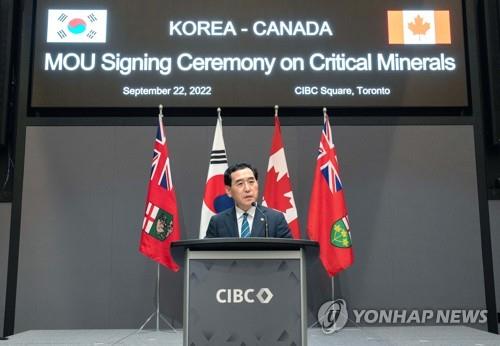 In addition to the mineral supply agenda, the two ministers agreed to continue searching for more opportunities for cooperation in other sectors, including semiconductors, power plants, renewable energy, low-carbon steel and bio.

In his trip to Washington on Tuesday and Wednesday, Lee met with U.S. Commerce Secretary Gina Raimondo and other government and Congress officials to deliver concerns by the South Korean government and the industry circle regarding the IRA.