(ATTN: UPDATES with nuclear envoys' consultations, other details in paras 9-11)
By Song Sang-ho

The Joint Chiefs of Staff (JCS) said it detected the launch from an area in or around Taechon, North Pyongan Province, at 6:53 a.m., and that it flew some 600 kilometers at an apogee of around 60 km at a top speed of Mach 5.

The intelligence authorities of the South and the United States are conducting a detailed analysis for other details, the JCS said.

The launch came as U.S. Vice President Kamala Harris plans to visit Seoul later this week and the allies are set to hold a joint maritime exercise in the East Sea, involving the USS Ronald Reagan carrier strike group.

"They reaffirmed that through the planned South Korea-U.S. maritime exercise and other efforts, they would further solidify a combined defense posture against any North Korean threats and provocations," the JCS said in a text message sent to reporters.

It strongly urged the North to immediately stop all ballistic missile tests, saying such a launch is an act of "significant provocation that undermines peace and stability on the Korean Peninsula as well as in the international community," and a "clear" breach of U.N. Security Council resolutions.

"While monitoring and tracking North Korean movements to prepare against any additional provocation in close cooperation with the U.S., our military will maintain a firm readiness posture based on the capability to respond overwhelmingly to any North Korean provocation," the JCS said. 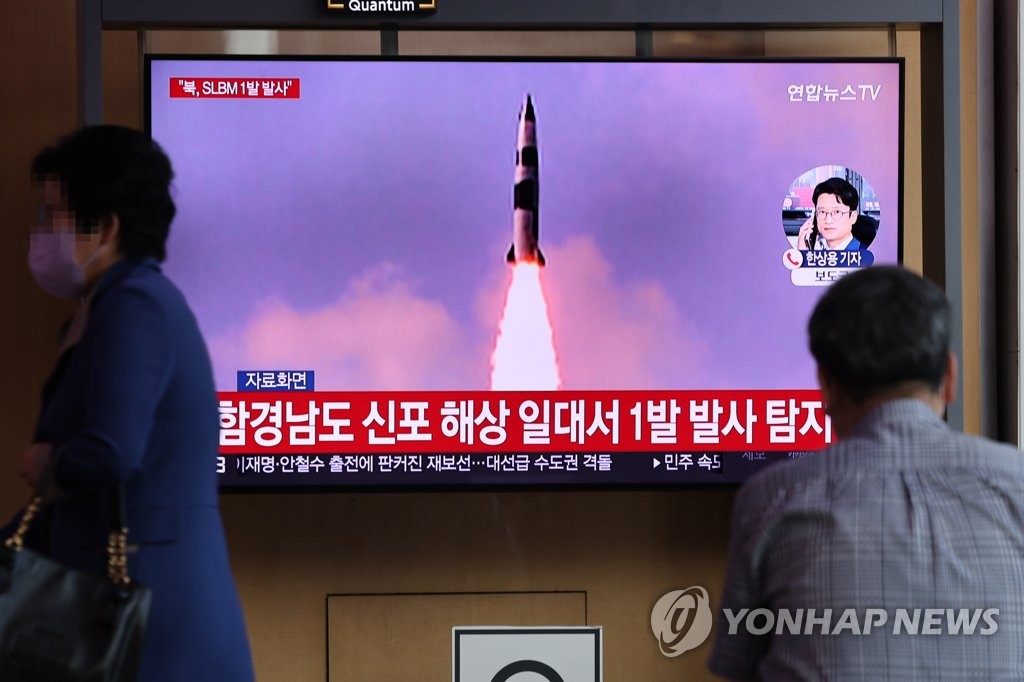 The military is looking into the possibility that the projectile fired was the KN-23 missile, which is similar to the Russian Iskander, a source said.

The country's top nuclear envoy, Kim Gunn, had back-to-back phone consultations with his American and Japanese counterparts -- Sung Kim and Takehiro Funakoshi, respectively -- and agreed to strengthen coordination against Pyongyang's saber-rattling, according to Seoul's foreign ministry.

"While we have assessed that this event does not pose an immediate threat to U.S. personnel or territory, or to our allies, the missile launch highlights the destabilizing impact of the DPRK's unlawful WMD and ballistic missile programs," the command said in a press release. DPRK stands for the North's official name, Democratic People's Republic of Korea.

The launch followed reports that Pyongyang seems to be preparing to fire a submarine launched ballistic missile (SLBM).

It marked the North's fifth missile launch since the Yoon Suk-yeol administration took office in May.

Harris plans to visit Seoul on Thursday after attending the state funeral of former Japanese Prime Minister Shinzo Abe in Tokyo -- a trip that the White House said is designed to highlight the "strength" of America's alliances with both nations.

It marks her first formal visits to the Asian allies since taking office last year.

The USS Ronald Reagan, a centerpiece of the U.S.' naval might, arrived in the southeastern port city of Busan on Friday to stage its first combined drills with the South Korean Navy in five years.