SEOUL, Sept. 26 (Yonhap) -- A group of lawmakers from the ruling People Power Party (PPP) said Monday they will take a series of legal measures, including filing a libel complaint, against MBC TV, accusing the broadcaster of misreporting President Yoon Suk-yeol's remarks made during a trip to New York last week.

Yoon came under fire after he was caught on video appearing to use foul language while talking to aides in New York last week. Though the recording of Yoon's remarks was not clear due to noise, many thought he was talking about the U.S. Congress and U.S. President Joe Biden.

PPP members of the parliamentary committee on broadcasting and communications also called for the resignation of MBC's CEO Park Sung-jae and the company's public apology, saying MBC's report "harmed the national interest."

They claimed the TV station made a malicious report of manipulating the Korean word for "throw out" into "Biden" and assumed without a fact check that Yoon's remarks were about U.S. Congress. The lawmakers also called the report "fake news" that would "go down in history."

The Korean word for "throw out" sounds similar to the pronunciation for "Biden." 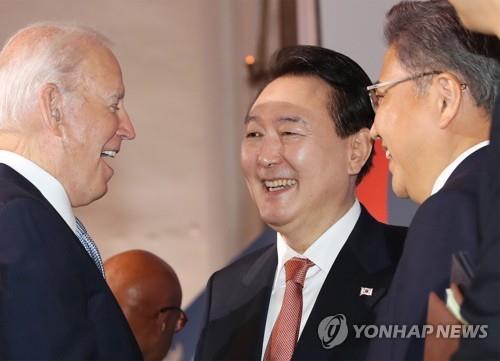