WASHINGTON, Sept. 26 (Yonhap) -- North Korea lashed out at the United States on Monday, accusing the U.S. of creating confrontation on the Korean Peninsula with the intention of toppling the Pyongyang regime while also trying to unjustly force "Western values" on sovereign states such as North Korea.

The latest attack on the U.S. was made by head of the North Korean mission to the United Nations.

"The security environment of the Korean Peninsula is now caught in a vicious cycle of tensions and confrontation due to the growing hostility of the United States and its following forces against the DPRK," the North Korean diplomat, Kim Song, said while addressing the U.N. General Assembly in New York, referring to North Korea by its official name, the Democratic People's Republic of Korea. 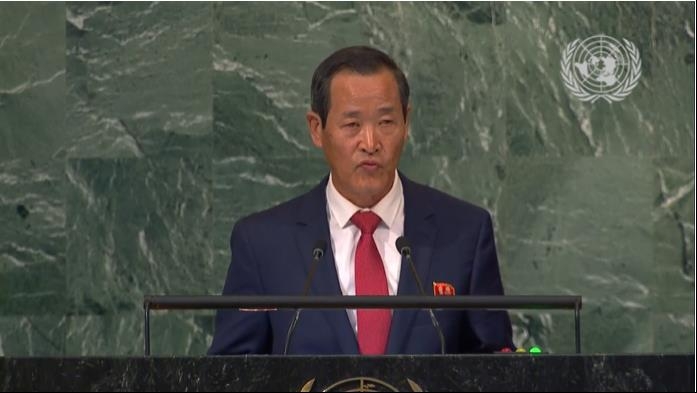 The North Korean diplomat added the U.S. is planning to conduct a joint military exercise, which he said arouses serious concerns and is an "extremely dangerous act" that can drive the situation on the Korean Peninsula to the "brink of war."

Noting the North's parliament recently adopted a law on the automatic use of nuclear weapons when the country is attacked, Kim insisted Pyongyang had no choice but to adopt such a policy due to U.S. hostility.

"The United States compelled the DPRK to adopt a law on the policy of nuclear forces in defiance of the U.S. hostility," Kim argued.

"The United States should clearly understand that its heinous and hostile policy against the DPRK over the past 30 years had just brought about today's reality, and ask and answer itself and ponder over how far it would prolong this situation in the future," he added.

The U.S. says the North has fired more than 30 ballistic missiles this year, each of which violated U.N. Security Council sanctions.

Seoul and Washington also believe the North is preparing to conduct a nuclear test, which will be its seventh test if conducted.

"The U.N. Security Council does not say even a single word about the high-handedness and arbitrariness, reckless arms build-up and war crimes of the United States, but only (inaudible) DPRK of its righteous effort to bolster national defense capabilities on a case by case basis," said Kim.

"As long as the double standards and unfairness and high handedness and arbitrariness of the United States are not removed, any decisions or resolutions adopted by the U.N. Security Council can neither have reasonable binding force nor contribute to ensuring global peace and security," he added.