Trading volume was moderate at about 478 million shares worth some 7.8 trillion won (US$5.5 billion), with losers outnumbering gainers 481 to 381. 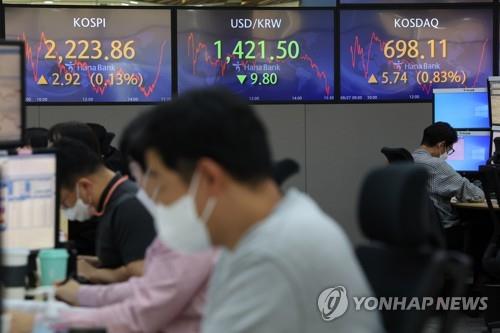 After opening a tad higher, the key index increasingly lost ground amid foreign sell-offs, dipping below the 2,200-point level for the first time in over two years.

But investors bought some oversold shares ahead of the market closing, helping the index stay in positive terrain.

Last week, the Fed raised its benchmark interest rates by three-quarters of a point, its third increase in a row, to bring down inflation.

Bond prices, which move inversely to yields, closed higher. The yield on three-year Treasurys lost 24.4 basis points to 4.304 percent, and the return on the benchmark five-year government bond fell 21.5 basis points to 4.348 percent.