Lee made the remarks at a ceremony celebrating the first flight of the jet that the country has been pushing to develop by 2026 under the 8.8 trillion-won (US$6.15 billion) project aimed at replacing the aging fleet of F-4 and F-5 fighters and bolstering air power.

Built by Korea Aerospace Industries Ltd. (KAI), the fighter successfully carried out its maiden flight in July, but the test proceeded without any government-led ceremony due in part to uncertainties over whether the flight would succeed or fail.

"I am thankful to KAI, the Defense Acquisition Program Administration (DAPA), the Air Force, related companies, academia and research institutes that have dedicated themselves to the development of the KF-21 fighter," Lee said.

"The KF-21 will be a key player for air defense that dominates future battlefields and will play a great role in deterring North Korean threats," he added.

The presence of the senior official from Indonesia, a partner country in the KF-X project, apparently highlighted the country's commitment to continuing its participation in the fighter acquisition program.

DAPA officials said that Wednesday's ceremony was intended to demonstrate the capability of the KF-21 fighter to carry out its flight mission safely.

"A success in developing a Korean-style fighter means the country will become an advanced country that uses its homegrown aircraft for training Air Force pilots and defending its territorial air," a DAPA official was quoted as saying.

KF-21 prototypes are set to make more than 2,000 sorties to complete the development process by 2026. 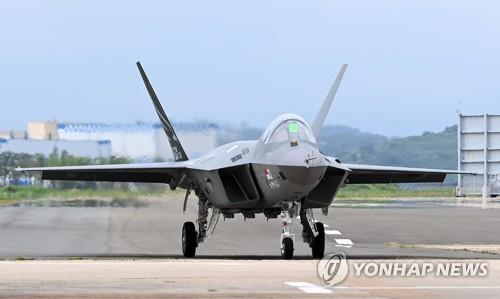