SEOUL, Nov. 14 (Yonhap) -- Automobili Lamborghini will bring plug-in hybrid models to South Korea in 2024 in its "hybridization" strategy before going fully electric by the end of this decade.

Renowned for its wild cars and powerful engines, Lamborghini has sold models under three combustion engine lineups -- the V8 engine-powered Urus SUV, the V10 Huracan and the V12 Aventador -- in Korea.

On Monday, Lamborghini launched the Urus S model in South Korea for the first time not only in Asia but also worldwide. But 2022 marks the last time Lamborghini models will be launched without any electrification.

The company stopped the production of the Aventador in September as it moves to replace most of its lineup with plug-in hybrid models by 2024 and all-electric ones by 2030.

The yet-to-be-named Aventador replacement will arrive as Lamborghini's first plug-in hybrid model in global markets in 2023 and the Korean market the following year, Lamborghini said. 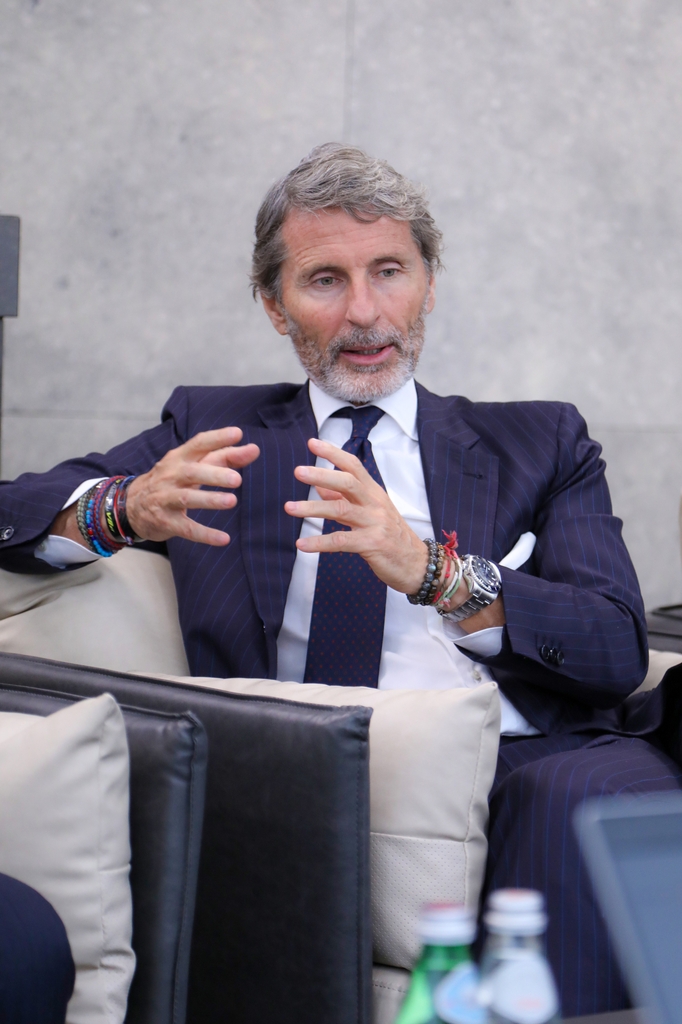 "South Korea is the No. 8 market for Lamborghini. It is growing even faster than the rest of the world. (That's why) I came here to analyze and better understand the Korean market," Chairman and CEO Stephan Winkelmann said last week in a group interview with Korean reporters.

Customers have an average waiting time of more than two years in Korea, longer than the 18 months for the rest of the world, the chairman said.

"We will give more allocations for more cars next year in comparison with this year for the Korean market," he said.

In October, Lamborghini Korea's vehicle sales jumped 61 percent to 53 units from 33 a year earlier though its sales from January to October slightly fell 1.9 percent to 311 from 317 during the same period of last year.

For the whole of 2022, the chairman said the company will have another record year in Korea if nothing unexpected happens. "After COVID, there was an unexpected fast return of the market, especially for the luxury business. It was something that really boomed. We also have to say one of the reasons is also the fact that we are selling last of the kind, last internal combustion engine cars, so the people really appreciate this," he said.

The company sold 353 vehicles in Korea last year. Lamborghini is one of four brands sold by Volkswagen Group Korea, along with the Audi, Volkswagen and Bentley brands.

Globally, Lamborghini delivered 7,430 units between January and September, up 8 percent from a year ago.

Looking ahead, the chairman expects the chip shortage will remain a problem for carmakers and higher demand for carbon fibers from the auto, airline and wind turbine industries will be another concern in 2023.

But a lot of new products and ample preorders worldwide will help the company offset the impact of economic risks, such as high inflation and supply chain issues, in 2023, Winkelmann said.

He said the company's hybridization strategy will give it an opportunity for next level growth starting in 2025.

In its electrification push, Lamborghini plans to launch its first battery electric vehicle in 2028.

"It will be 2+2 GT car (which means two front-row seats and another two in the rear row) with two doors," the German native said.

When asked about electrification, he said there are four things that make a real Lamborghini: design, performance, the feel of the performance and sound.

"On the first three ones, we can cope with electrification, also when it comes to full electrification," the executive said. "But on the sound, this will be different. We have not decided so far if we are not adding any sound or if we are going to produce a sound which is typical for Lamborghini."

Lamborghini is not going fully electric before 2028 and this means the technology then will be different, he said, adding that new generations want to have performance, as well as sustainability, in Lamborghini cars.

"This things in the next years will be even more important so I have no worries about the future," Winkelmann said.

Asked about an initial public offering (IPO) and the addition of autonomous driving function in its models, the chairman said the company does not have any such plans at the moment.