On a consolidated basis, net profit for the three months ended in September jumped to 374.26 billion won (US$285 million) from 106.27 billion won a year ago, the company said in a statement.

"Demand for overseas travel has been on a sharp rise as mandatory quarantine for international arrivals has been removed at home and abroad," the statement said.

Passenger traffic soared 67 percent in the third quarter from a quarter earlier helped by the resumption of flights on major routes to Europe and Southeast Asia, Korean Air said, adding recovering passenger demand helped offset the impact of a weak won.

The dollar rose to an average of 1,338 won in the third quarter from 1,157 won a year earlier, according to the Bank of Korea. A weak won pushes up airlines' jet fuel costs.

The national flag carrier resumed services on the routes to Las Vegas, Milan, Barcelona, Rome, Da Nang and Bali during the September quarter.

Looking ahead, the company expected a global economic slowdown could weigh on cargo demand in the fourth quarter but international travel demand could increase further.

From January to September, net profit soared to 1.35 trillion won from 167 billion won during the same period of last year.

Net profit more than tripled to 2.31 trillion won in the first nine months from 714.22 billion won a year ago. Sales jumped 67 percent to 10.22 trillion won from 6.11 trillion won during the cited period. 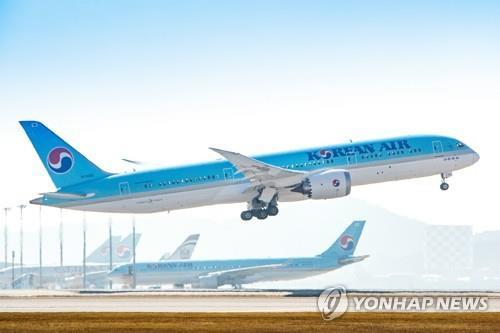