According to industry sources, Hyundai Card Co., a local credit card firm under the wing of Hyundai Motor Group, will provide the Apple Pay service from the end of November under a one-year exclusive contract with Apple Inc.

Launched in the United States in 2014, Apple Pay allows users of Apple devices, including the iPhone and iPad, to make payments in person without plastic cards. It is available with select terminals using the near-field communication (NFC) system, a short-range wireless protocol.

It became the second-most popular digital payment system in the world with over a total of US$6 trillion worth of transactions for 2021, following Visa with $10 trillion. It is available in many countries, including the U.S., Britain, mainland China and Japan.

But it has been out of reach of South Korean iPhone users due to the strong dominance of Samsung smartphones and a lack of technological infrastructure for NFC payment.

Samsung smartphones took up 72 percent of the local smartphone market last year, up from 65 percent a year earlier, according to data from market tracker Counterpoint Research.

Samsung Electronics' digital payment service Samsung Pay, based on the magnetic secure transmission (MST) technology, was the most-used financial services app in Korea in the first quarter with 14.8 million users, according to data from Mobile Index.

According to a half-yearly report by the Bank of Korea (BOK), the daily average amount of electronic financial transactions came to 723.2 billion won ($535.8 million) in the January-June period, up 29.4 percent from a year earlier.

Electronic financial transactions include all internet and mobile-based payments, as well as purchases made with electronic credit and debit cards.

Out of the total, 170.3 billion won, or 23.5 percent, worth of transactions were made through payment services by mobile phone manufacturers largely led by Samsung Electronics. 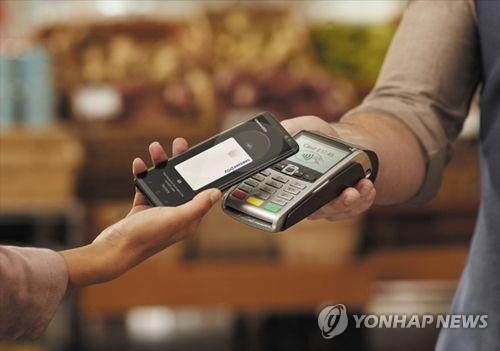 Experts expected the long-awaited mobile payment system to be a key player in breaking the supremacy of Samsung Pay in the mobile payment market, citing Apple's decadelong experience in the global digital payment industry and Korean iPhone users that account for more than 20 percent in the country.

"It is highly anticipated that Apple Pay will play a big role in the local digital payment market," analyst Kim Jae-woo from Samsung Securities Co. said. "It has practical skills in the global market for nearly 10 years and most iPhone users will rapidly turn into Apple Pay clients."

But they also pointed out that the expansion of NFC infrastructure will be the key to Apple Pay's successful arrival in South Korea.

Industry data showed that out of 2.8 million businesses offering card services in South Korea, more than 90 percent are equipped with MST technology-based payment devices, on which Samsung Pay is based. Less than 10 percent have an NFC-based terminal for Apple Pay, which reportedly costs around 150,000 won.

It may take time and money to help businesses set up new terminals for NFC payment and accept Apple Pay users, they added.

On top of that, Apple requires participating card issuers pay for the service in a commission rate of 0.1-0.15 percent of the transaction amount, while the card companies have to pay 5-10 won in royalty per payment to Visa and Mastercard.

"If the initial outcome of the Apple Pay service fails to meet the market expectations, local businesses and financial firms will become more reluctant to set up NFC terminals," analyst Kim said. "Then, Apple Pay will struggle to make its presence felt in Korea." 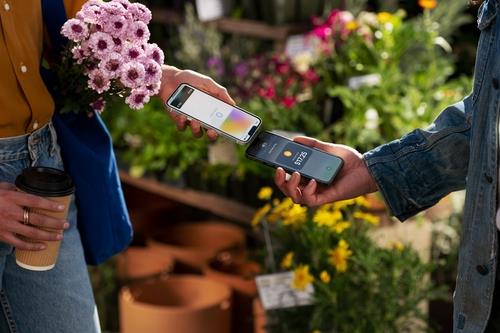