SEOUL, Nov. 21 (Yonhap) --"Hero," the film adaptation of the award-winning musical based on the life of Korean independence fighter Ahn Jung-geun (1879-1910), features actors who sang during the filming without lip-syncing to convey vivid emotions on the big screen, its director said Monday.

"Hero" is a biopic of Ahn, who assassinated Ito Hirobumi, Japan's first resident-general of Korea, on Oct. 26, 1909, at Harbin Station in northern China. Five months after the assassination, he was executed in a Chinese prison at the age of 34.

The story sheds light on Ahn's life in his final year, featuring narratives of his mother and other Korean independence activists. 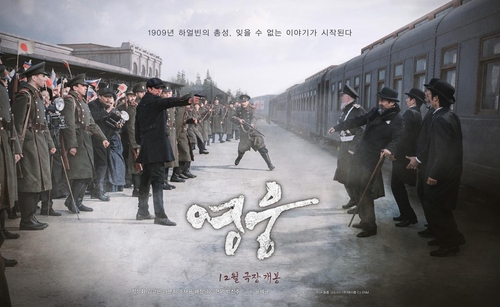 Director Yoon Jae-kyoon said he decided to adapt the original musical under the same title, which premiered in 2009, to commemorate the centenary of Ahn's execution. The movie finished filming in 2019, but its theatrical release has been delayed due to the COVID-19 pandemic.

"When I watched the musical, I cried a lot because I felt so sorry for Ahn Jung-geun," Yoon said in a press conference in Seoul. "I felt sorry for all independence fighters and decided to make the musical into a movie some day."

The director behind two megahit films, "Haeundae" (2009) and "Ode to My Father" (2014), said he insisted on getting the actors to sing during filming in long takes to portray their genuine emotions on the big screen.

"All of my suffering began at the moment when I decided to shoot live shots of (the actors' singing)," Yoon said. "Looking back, it was a really tough job, but I don't regret it at all."

Yoon said he tried to hit the right balance between "the new and the familiar" in his experimentation with Korea's first film adaptation of a homegrown stage musical.

Actor Jung Sung-hwa, who won awards for his charismatic role in the original musical, said he was both honored and burdened to act in the leading role of the independence fighter who sacrificed his life for his country.

"In musicals, singing is the stage language. But in movies, singing lines could seem unnatural," Jung said. "I tried to focus on how to sing naturally in the movie."

"Hero" will hit local theaters next month, while its specific schedule has yet to be confirmed, according to its distributor CJ ENM.