SEOUL, Nov. 22 (Yonhap) -- The bereaved families of some Itaewon crowd crush victims held a news conference Tuesday, calling for the punishment of those responsible for the tragic accident.

The conference was organized in southern Seoul by Minbyun-Lawyers for a Democratic Society, an organization of progressive lawyers, which it says legally represents the families of 34 of 158 people killed during and after Halloween celebrations in Seoul's Itaewon district on Oct. 29.

It marked the first press conference by victims' families. 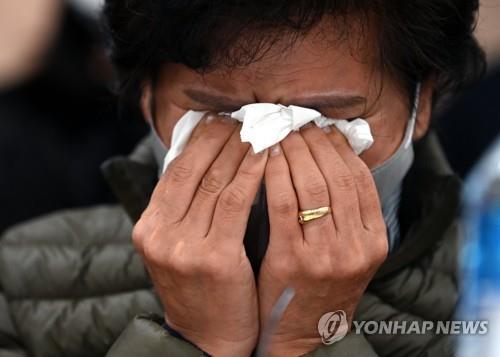 The families put forth a six-point demand, which includes a sincere apology, a thorough investigation into those responsible and prevention of secondary harm.

They also asked the government to ensure communication and humanitarian measures for the families of the disaster victims, and take proactive measures for full memory and remembrance of the victims.

Lee Jong-gwan, who lost his daughter, Mina, a university student majoring in computer science, said the tragedy was caused by the failure to properly manage a crowd of 130,000 people.

"The police's failure to send a riot squad to Itaewon that night indicates they were more interested in the management of protesters and security work than in the safety of ordinary people," Lee said, accusing the government of failing to organize a gathering of the bereaved families and secure a space for their psychological stability.

A weeping woman whose son died in the accident said she cannot send off her son without knowing the cause, place and time of his death.

A Minbyun lawyer said the organization will officially announce what legal action will be taken after further consultations with the bereaved families.