SEOUL, Nov. 22 (Yonhap) -- Netflix series "Somebody" is a genre mash-up of a thriller and a romance drama that brings an unflinching eye to the dark side of human nature with strong violence and sexual content.

Director Jung Ji-woo said he needed the violent scenes to tell a "bizarre love story" but tried to portray them not too realistically to prevent viewers from copying them.

The eight-episode series surrounding people who have their own flaws and want to connect to each other received a "19+" rating in South Korea, equivalent to an X-rating for adult content in the United States.

"If a 29+ rating exists, I want to become a director who makes such a movie," Jung said in a group media interview in Seoul on Tuesday. "I think detailed descriptions of damaged bodies were limited, while the relations and human minds behind the scenes were really provocative. I couldn't leave out those parts." 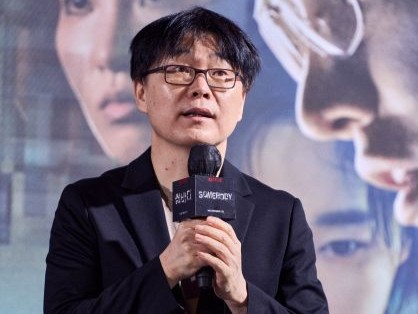 Sum develops a dating app called "Somebody" in hope of relating to others. Yun-o is an attractive man who can easily seduce women he connects with through the app, but he often feels intense hostility toward them. The two develop an unusual relationship and gradually fall into precarious territories.

Jung, known for tightly woven dramas "Happy End" (1999) and "Eungyo" (2012), said he was at first offered to work on a story about three people who fight against a villain and transformed the plot into his own style.

"The story began with three people who are obviously fragile. I was curious about it, and eventually, this bizarre love story was created," Jung said. "I think my intention was appropriately expressed (in the work). I think I got the offer as this was obviously a love story, not just a thriller."

Casting rookie Kang and Kim, known for his role in romantic comedies, was a challenge for Jung, but the veteran filmmaker said he was satisfied with the actors' performances. He described Kang as a "unique" person who fits the lead role, while Kim seemed to be "thirsty" for new roles.

"I wanted (actors) who could give their all and go along with the work that requires intensive energy," he said. "I wanted to venture out, and it worked out well."

The director said he "fell in love with" Kim, who played the serial killer, while working on the project.

"If he is portrayed as a scary person, that would be a failure," he said. "Despite the ominous feelings, I wanted to make viewers like to meet the person if there's an opportunity as the story develops."

Released Friday, "Somebody" had been the third-most streamed show on Netflix Korea and entered the Netflix Top 10 in 10 other nations as of Monday, according to streaming chart FlixPatrol.