AL RAYYAN, Qatar, Nov. 24 (Yonhap) -- Even going up against favored Uruguay to begin their 2022 FIFA World Cup in Qatar on Thursday, South Korean players had no fear in them, their coach claimed.

And that courageous mindset helped lead to a hard-earned 0-0 draw for the Taegeuk Warriors.

"We had a very good performance and we are a brave team," Paulo Bento said at his postmatch press conference at Education City Stadium in Al Rayyan, just west of Doha. "We are not afraid of our rivals." 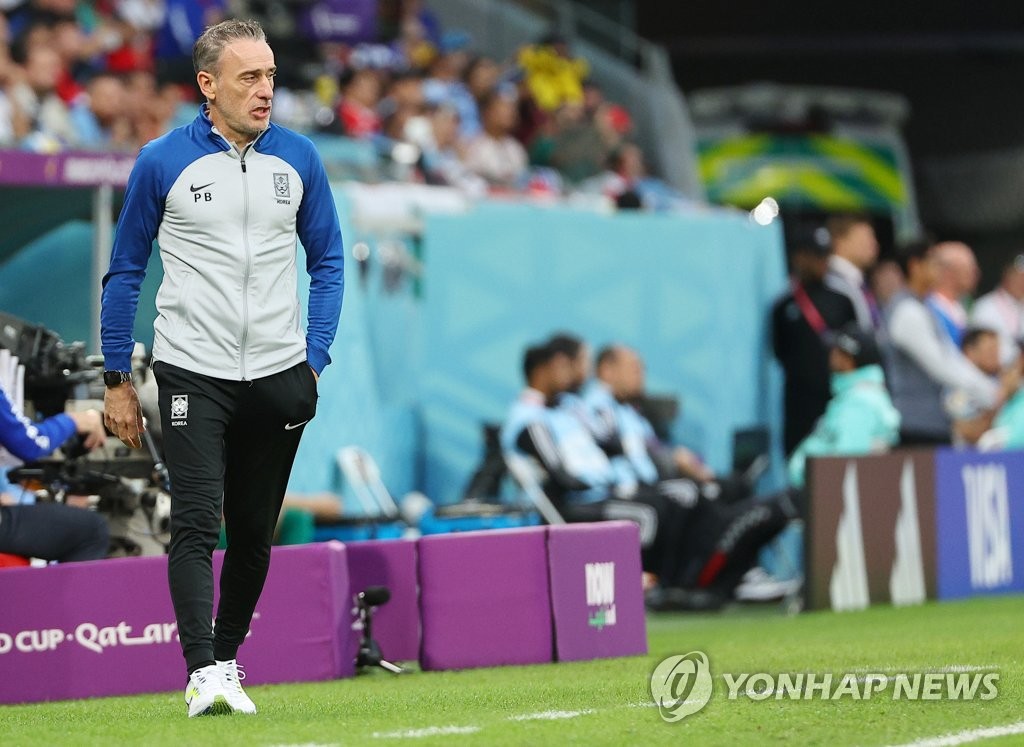 South Korea were also lucky, as Uruguay struck the goal post once in each half. But they still deserved credit for putting in such a strong defensive effort against a quality team, Bento said.

"I believe we were better in the first half," Bento said. "We were not at our best performance in the second half. We suffered a bit because they are very high quality players and we were a bit more tired. But we will try to keep up with the same level of aggressiveness (in the next matches)."

Bento admitted that an apparent foot injury to his top center back Kim Min-jae around the hour-mark contributed to a dip in the team's overall defensive performance in the second half. While chasing down Darwin Nunez on a counterattack opportunity, Kim had his feet caught on the field and fell. He stayed down for a few moments in obvious pain but played the entire match.

"The injury hindered our performance, as we couldn't continue with the game we had due to difficulties he was facing," said Bento, adding that he didn't have further updates on Kim's condition. "We then decided to lower our defensive line." 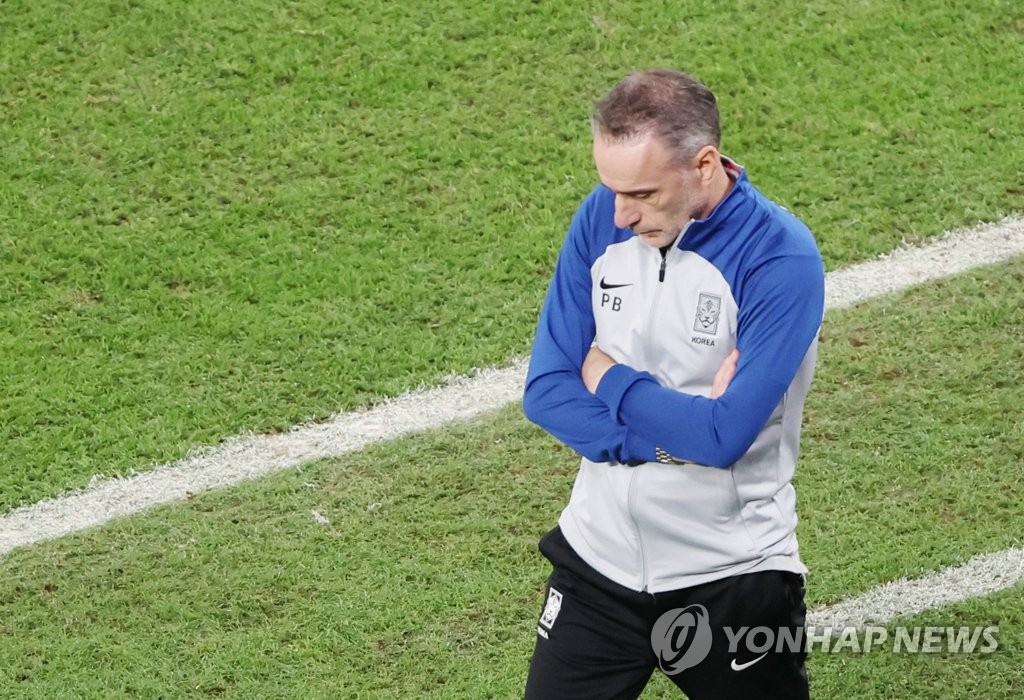 Bento also paid tribute to captain Son Heung-min, who played wearing a protective mask on his injured face, barely three weeks after undergoing surgery to repair fractures around his left eye. This was Son's first game since suffering that injury in a collision with another player on Nov. 1.

Son had one dangerous chance in the 90th minute with his patented left-footed strike, though the shot went just right of the target.

Considering the circumstances, Bento said he couldn't be happier with Son's performance.

"He was inactive for a considerable amount of time. He could only integrate into our team in the last (several) days," Bento said. "It's natural that, after an injury, it will take him some time to readapt."

Bento usually avoids discussing the merits of individual players, and he was no different Thursday.

"Sometimes, we focus on one particular player, on offense, or goals they score. We as coaches value other elements," Bento said. "I think most players are very proud to represent their national team despite their difficulties." 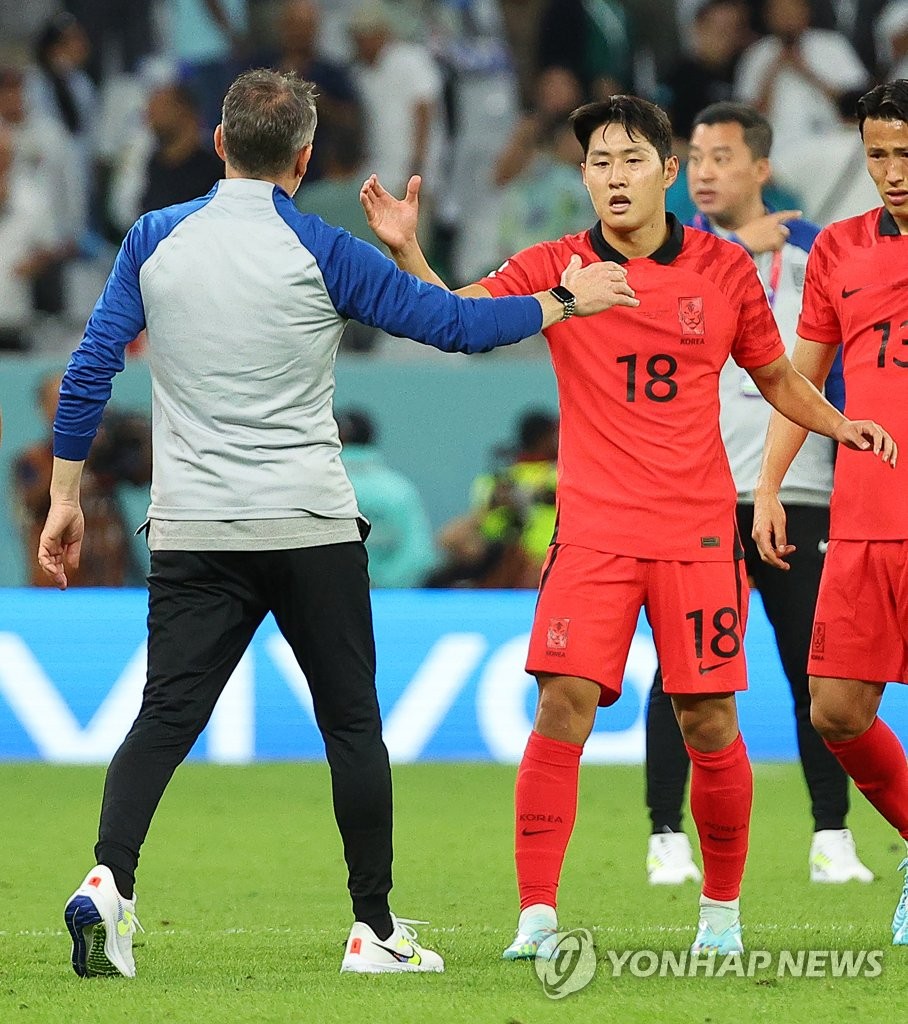 Bento made a surprise substitution in the 74th minute, inserting midfielder Lee Kang-in to help spark some offense.

The Korean fan base has had a running feud with Bento over the coach's reluctance to play Lee, a highly-talented attacker for RCD Mallorca. Bento was even booed in September after keeping Lee on the bench for both of South Korea's two friendly matches.

Bento said he wanted Lee to impact the game with his speed and offensive skills.

"He has a very good capacity to dribble the football. We know he's someone who can take the ball away and reach the opposite half with speed," Bento said. "He's had a very good performance in training here."

Yoon to preside over meeting on key policy tasks